For South Island roofing installer Courtney McDowell, this was no ordinary job. His team were flown by helicopter to the building site each day, in a remote location in the Southern Alps, where they worked against the clock in sub-zero temperatures. And given that all materials were arriving by barge and helicopter – everything had to be pre-planned down to the millimetre.

The project was building four luxury guest chalets for Minaret Station Alpine Lodge, which is one of the world’s most unique lodge experiences. There is no road access to the Lodge, which is located in a glacial valley, sitting at an elevation of 3,000 ft (830m).

The roofing and cladding, in .40mm ColorCote ZinaCore Corrugate, was supplied by Dimond Roofing. The project was a “really interesting challenge” for installer Courtney McDowell, of Attention to Detail Roofing, and his team Phil Hannah and Brenton Cook.

“We’d get dropped in at 8.30am and fly out at 3 pm …and we’d go flat out, only stopping for a short break to get some food inside us,” says Courtney.

“It was actually really enjoyable – with the challenge of seeing how much work we could get through in a day.”

It took the team a total of 35 days to roof and clad the four new chalets. And as Courtney explains, the logistical difficulties and lack of road access also required meticulous planning:

“There was a lot of pre-planning that went into it… I would spend a whole day in the office just working everything out. It’s too expensive to make a special trip if something is left behind; so you have to think of every single item and little piece of flashing you’re going to need.”

Making sure the project ran smoothly required a lot of teamwork between Dimond and Courtney’s team. Supply of the product was overseen by Dimond’s Area Sales Manager, Chris Silcock, while Customer Services Representative Janelle Bryson liaised with Courtney to coordinate it all.

So the steel could be flown by Helicopter, it had to be pre-packaged to certain weights to the nearest kilo. It also had to be ready-to-go when needed; with a two-day lead time from the cutting list.

“Because we were meeting helicopters and barges, everything had to be scheduled to be in the right place at the right time,” says Chris.

Dimond and Courtney have done business together

for about 10 years – and there was one particular instance where their teamwork really came into play.

“One pack of iron was damaged in transit on the way up to the site,” recalls Courtney.

“I got a call about 4.30pm, saying we needed to get it replaced asap. Janelle from Dimond Roofing got things moving straight away, and we had the replacement iron shipped up the next day. That’s the kind of relationship I have with Dimond Roofing; it’s what makes a challenging job like that work.”

Nestled on the western shores of Lake Wanaka - and accessible only by boat or by helicopter – Minaret Station is a 50,000-acre property. It is owned and operated by four brothers in the Wallis family.

As well as providing the stunning location for the Alpine Lodge and tourism business, the station is also a working high country farm. Around 10,000 deer, 7,000 sheep and 1,000 cattle are raised for premium export and domestic markets. The Wallis family also run a helicopter operation.

It is a uniquely integrated business dating back to the early 1960s, when their father Sir Tim Wallis (known as ‘Hurricane Tim’), first began introducing international guests to New Zealand’s pristine wilderness.

Guests can choose to either kick back at the lodge; or take part in adventure activities such as guided hiking, hunting, fishing, and heli-skiing.

The use of Corrugate in the design of the buildings was very deliberate. As well as its durability and performance, the colour-coated Corrugate provided the perfect aesthetic. The Lodge buildings were designed to reflect elements of the traditional high-country station homestead and shepherd’s huts.

As Jonathan Wallis explains: “Corrugate is quintessentially New Zealand…we wanted the look and feel of the Lodge buildings to be in keeping with our high country heritage.”

The architectural designer for the project is Pete McGrath, of Gemrock Design in Bannockburn. He agrees that Corrugate was always going to be the number one choice.

“Although the buildings are luxuriously appointed, we didn’t want the design to be too pretentious. It was about combining simple shapes and strong lines; with traditional features like rough-sawn timber, verandah decking and exposed rafters.”

The build was also sympathetic to the land. Pete McGrath says the engineers, Batchelar McDougall Consulting, did an “awesome job” of designing the pile structure. As well as avoiding the difficulties of shipping in quantities of concrete, it also leaves a lighter and more sustainable footprint on the wild terrain.

The beauty of Corrugate

Pete McGrath is a firm advocate when it comes to the use of Corrugate – it even features in the design of his own home. “It’s one of my favourite products. In most of my new-home designs, I would specify ColorCote over anything else.”

He believes the texture of Corrugate adds another dimension to both roofing and cladding. “I like the way that light interacts with it…and the textural shading you get with the corrugation. It’s never flat; it always provides that interesting blend of colour. I like using Sandstone Grey, for instance, because it replicates the look of the old galvanised iron sheds.”

The colour palette chosen for the Minaret Alpine Lodge chalets was designed to complement the landscape; with the roofs in Karaka Green, and the cladding in Lichen.

The durability of Corrugate is another big advantage for the Alpine Lodge buildings, where repetitive maintenance or re-paints would mean considerable extra expense.

“We all know how durable the modern Corrugate products are,” says Pete. “It’s an awesome product – you can essentially put it up and forget about it, and nature will just look after it.” 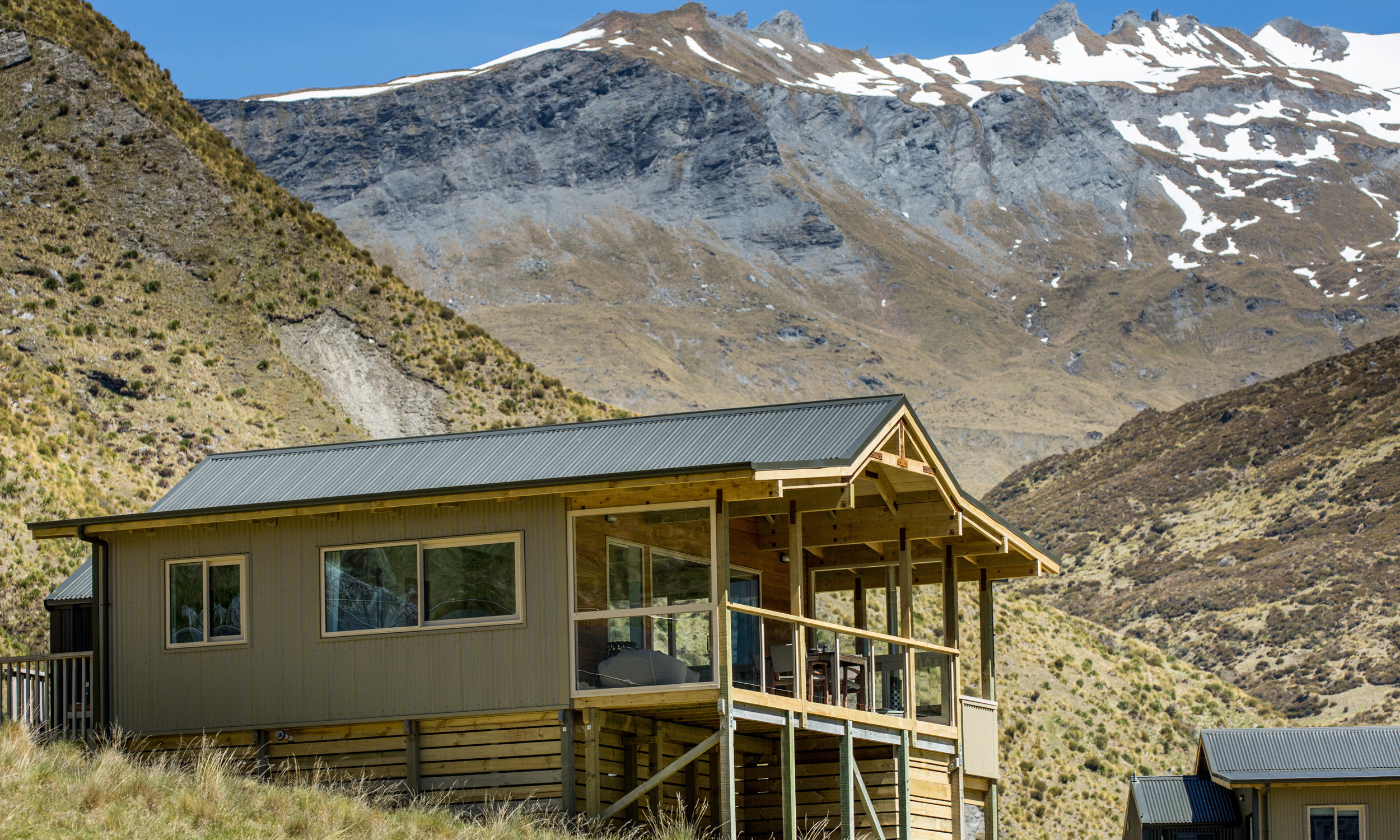 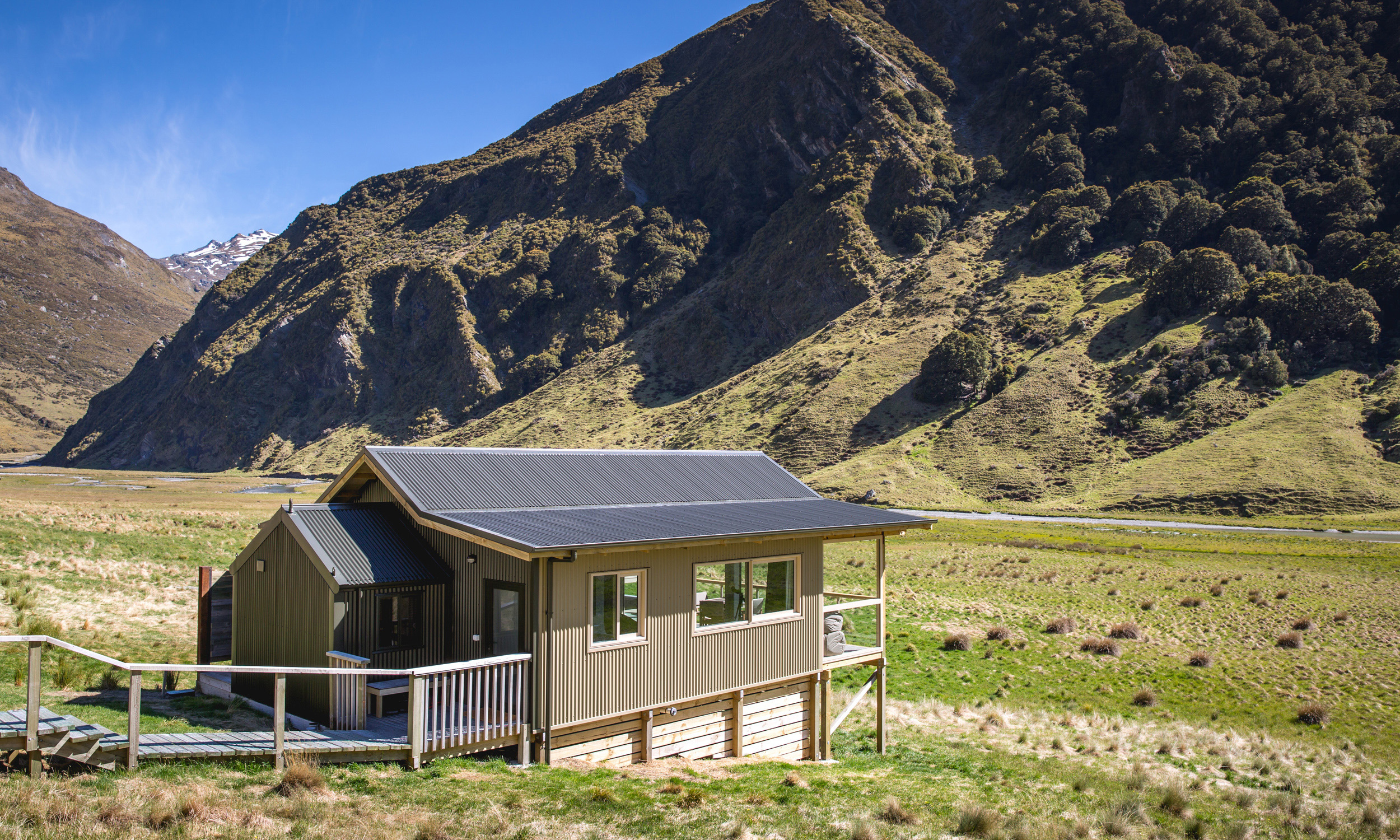 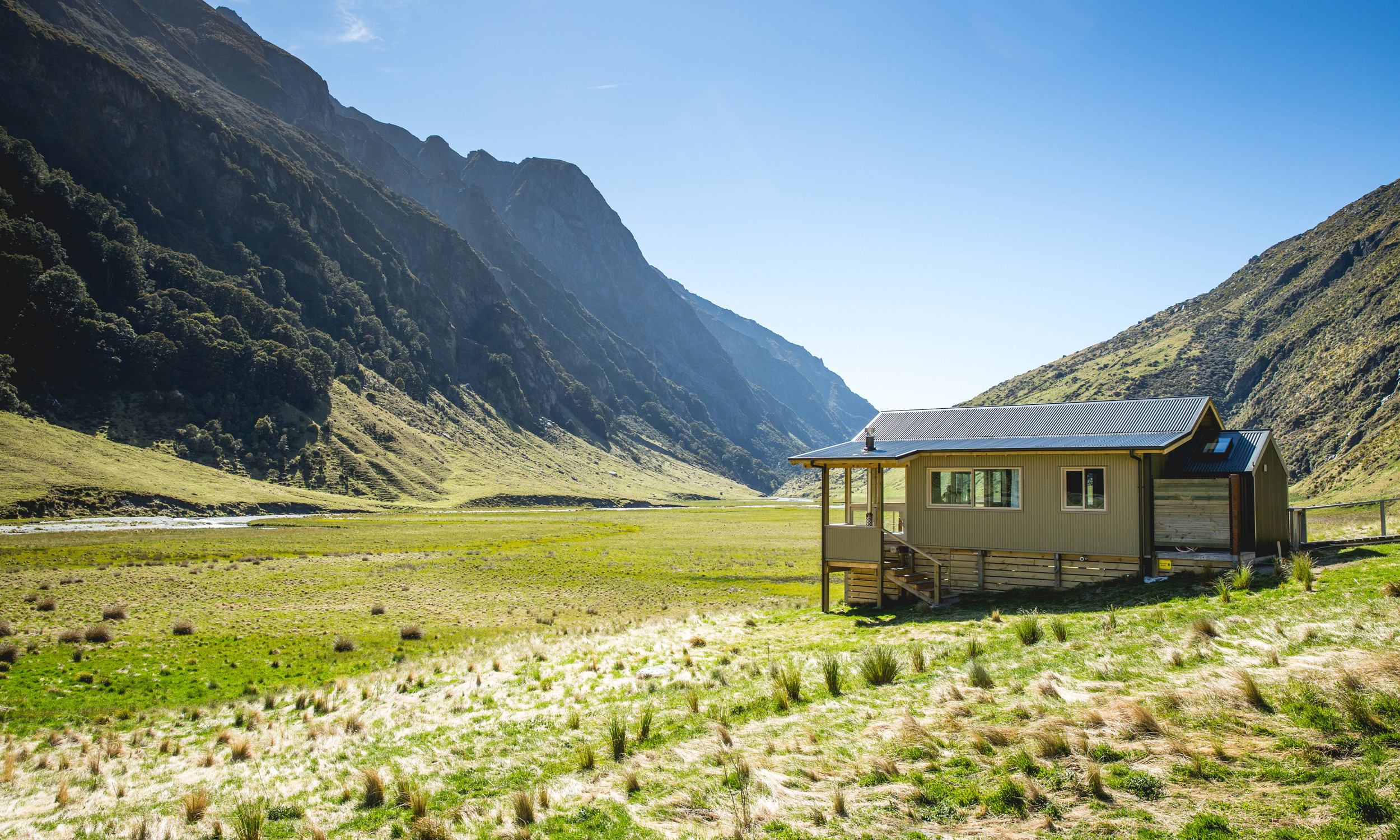 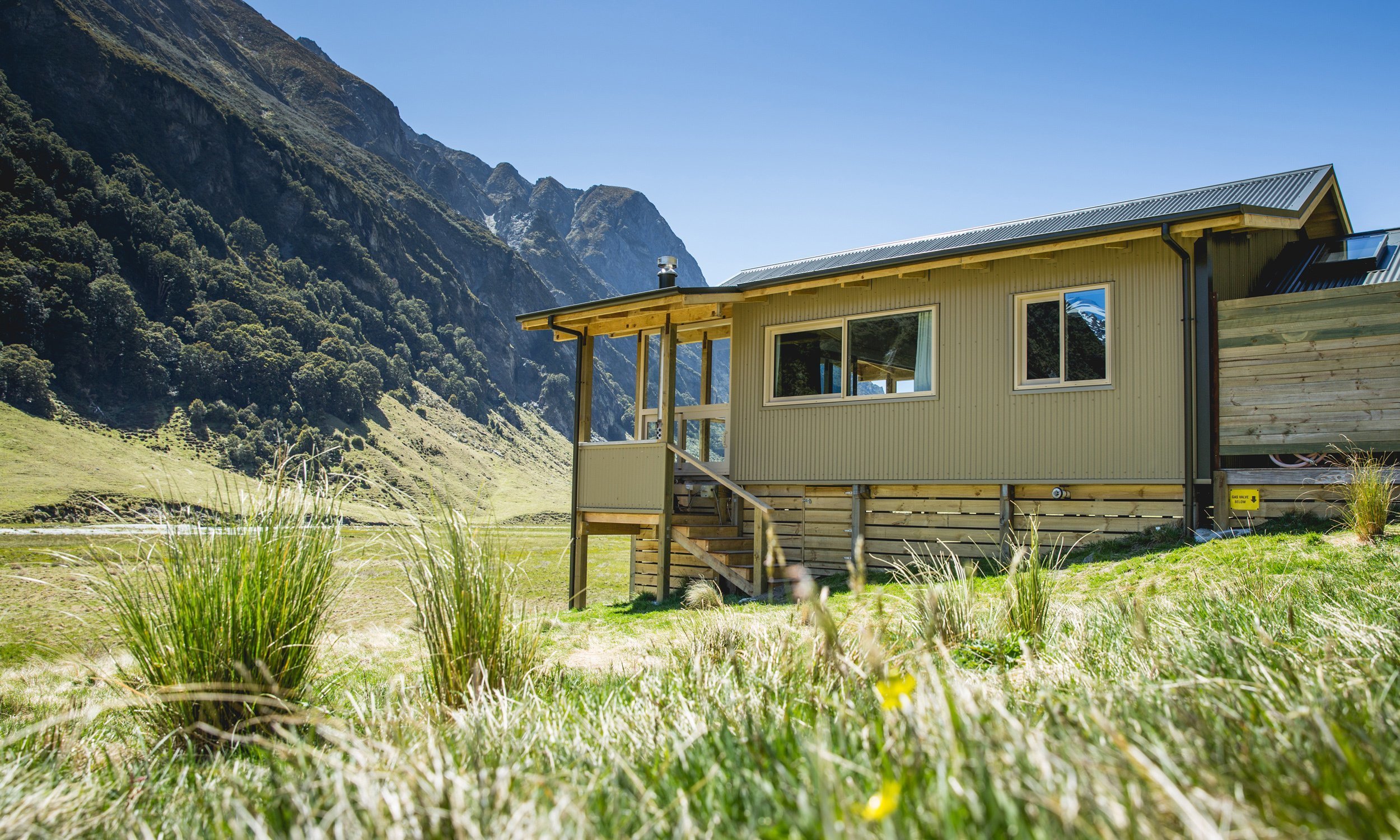 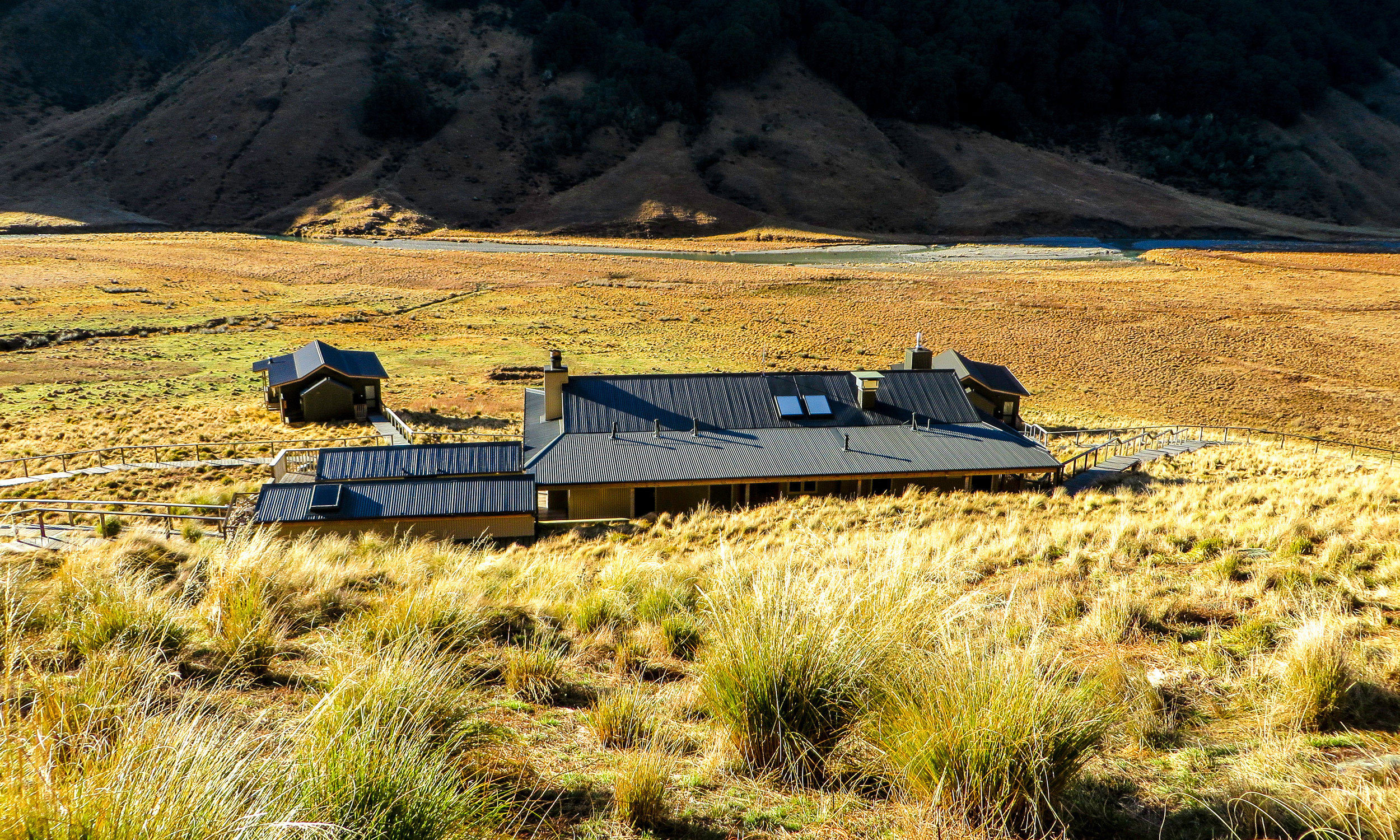