When Dravitzki Brown Architecture was approached to design a family home near Queenstown, the brief was straightforward: “A simple form, with impeccable detailing”.

The owners wanted something that sat elegantly and easily on the land – a flat site with a northwest aspect at Speargrass Flat, part of what is known locally as “the Golden Triangle”, with views of Coronet Peak.

As Alister Brown, of Dravitzki Brown Architecture, explains, “The Ebbinge House is an uncomplicated gable pavilion with attached garage, and true to the client’s brief maintains clean, elegant lines and simplistic form.

With that in mind, Alister chose to wrap a large proportion of the house in Dimond’s Eurotray Angle Seam profile.

“We chose Eurotray® due to its durability, low maintenance and because it can be seamlessly transitioned from roof to walls to give the look of a single, pure form”.

That philosophy is best illustrated on the northern face of the home, where the roof flows down to the walls with the seams of the Eurotray® lining up beautifully with the frames of the recessed windows and doors.

“It’s incredibly difficult to do and requires huge attention to detail when you are setting it out,” says Alister. “You can make different cuts of sheet so that not every sheet has to be exactly the same so you do have a bit of tolerance in a material that might seem inflexible.”

Reputation of the product is only as worthy as the tradesman who install it Alister says selecting a Dimond architectural profile came with the assurance that they also had certified installers with a high degree of training capable of achieving flawless detailing.

He says, “The reputation of a good product is only as worthy as the tradesmen who install it. On this occasion, the RoofingSmiths Queenstown were awarded the task of bringing the intricate detailing to life.

To ensure everything lines up with the building, from windows to corners; and to ensure the look is symmetrical and balanced from every angle means a lot of thought, measuring and setting out before the job can even begin.

Jeremy Harrison, project manager at RoofingSmiths Queenstown, says, “One of the beauties of the Eurotray® is it is such a flexible product; you can cut the sheets to fit so what you end up with is a custom-made roof.”

He says the roof/wall junction is crimped together with a little bit of overhang to create a knee that allows water to drip from the roof to the ground.

To maintain the uncluttered look, internal membrane gutters have been employed – the only evidence of which is a narrow slot towards the bottom of the roof along almost its entire length. The flashings were made slightly bigger so as to conceal the membrane from view and minimise the visual impact of the gutter. To the south, a concrete clad punchout that houses the kitchen and scullery breaks up the form of the house as does the use of dark-stained vertical cedar cladding. An attached cedar and concrete garage helps to shelter the entry beside the kitchen and has access to the house through the laundry. The in-situ concrete is softened by being board- formed so it picks up the irregularities and grain of the Oregon timber used in the boxing.

The thermally efficient home sits on a double concrete slab and its perimeter is cantilevered so that it appears to float above the ground.

Large, offset concrete slabs are used as steps front and rear and also appear to float. Alister says, “We have used steps like that at our house and the owners saw them and liked them.” There are other detailing touches such as vertical LED strip lighting that sits between the textured concrete and the vertical cedar cladding. Once you move past the detailing, the other part of the equation – the simple form – becomes apparent. The layout of the home is straightforward, moving from the living, dining and kitchen area on the western side through to the snug/media room then three bedrooms culminating in the eastern side with the master bedroom and ensuite. Stacking sliders open the living space to the north where there is a patio. Minimal landscaping means the form of the house is prominent from every aspect. Alister says his clients loved the finished product, and RoofingSmiths Queenstown have since been commissioned to do work on other Dravitzki Brown Architecture projects, a credit to the exacting standard of their workmanship and attention to detail.

He says, “The Ebbinge house is an outstanding example of what can be achieved with great design and product selection, as well as craftsmen who can bring the vision to life.” 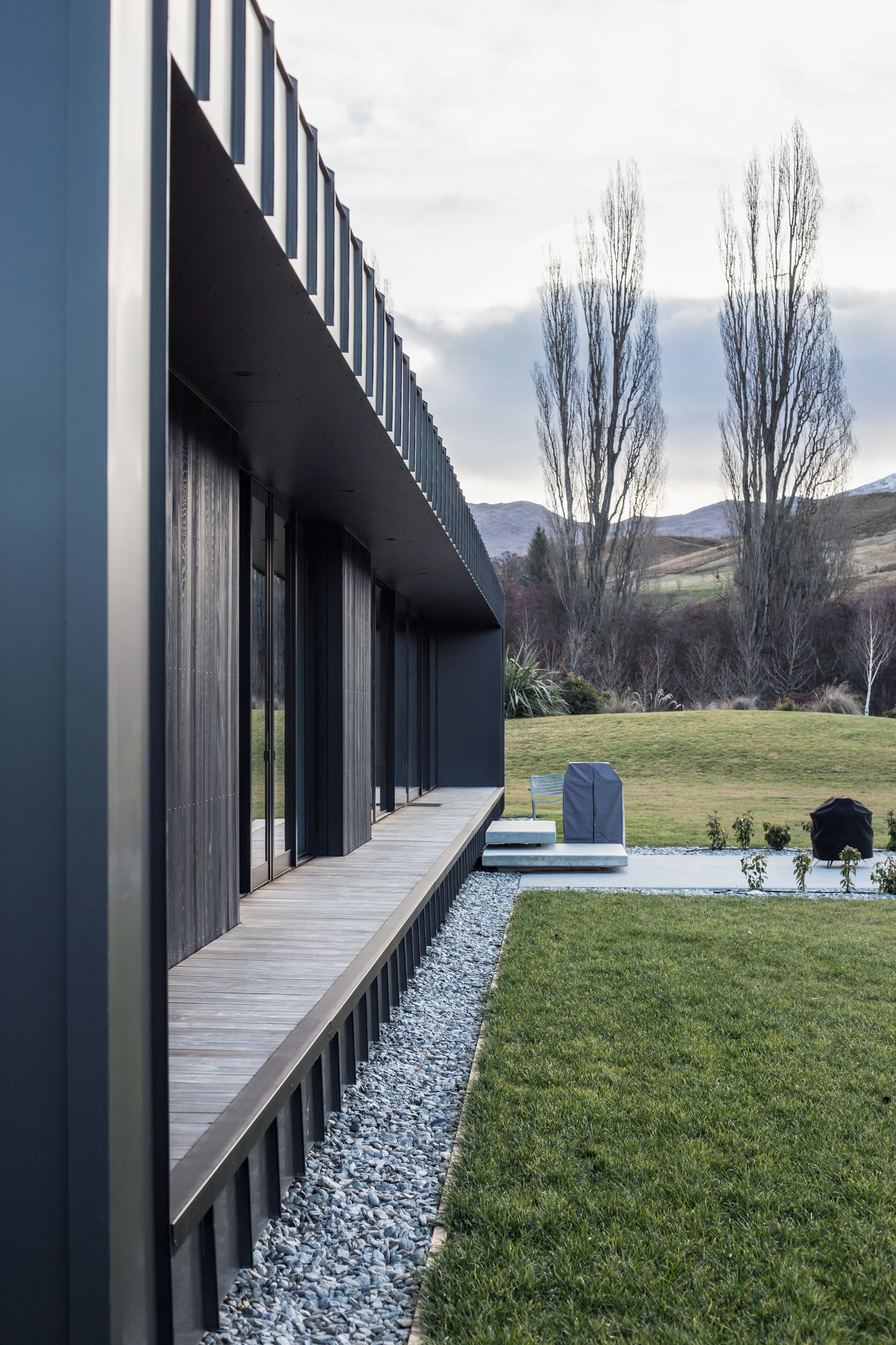 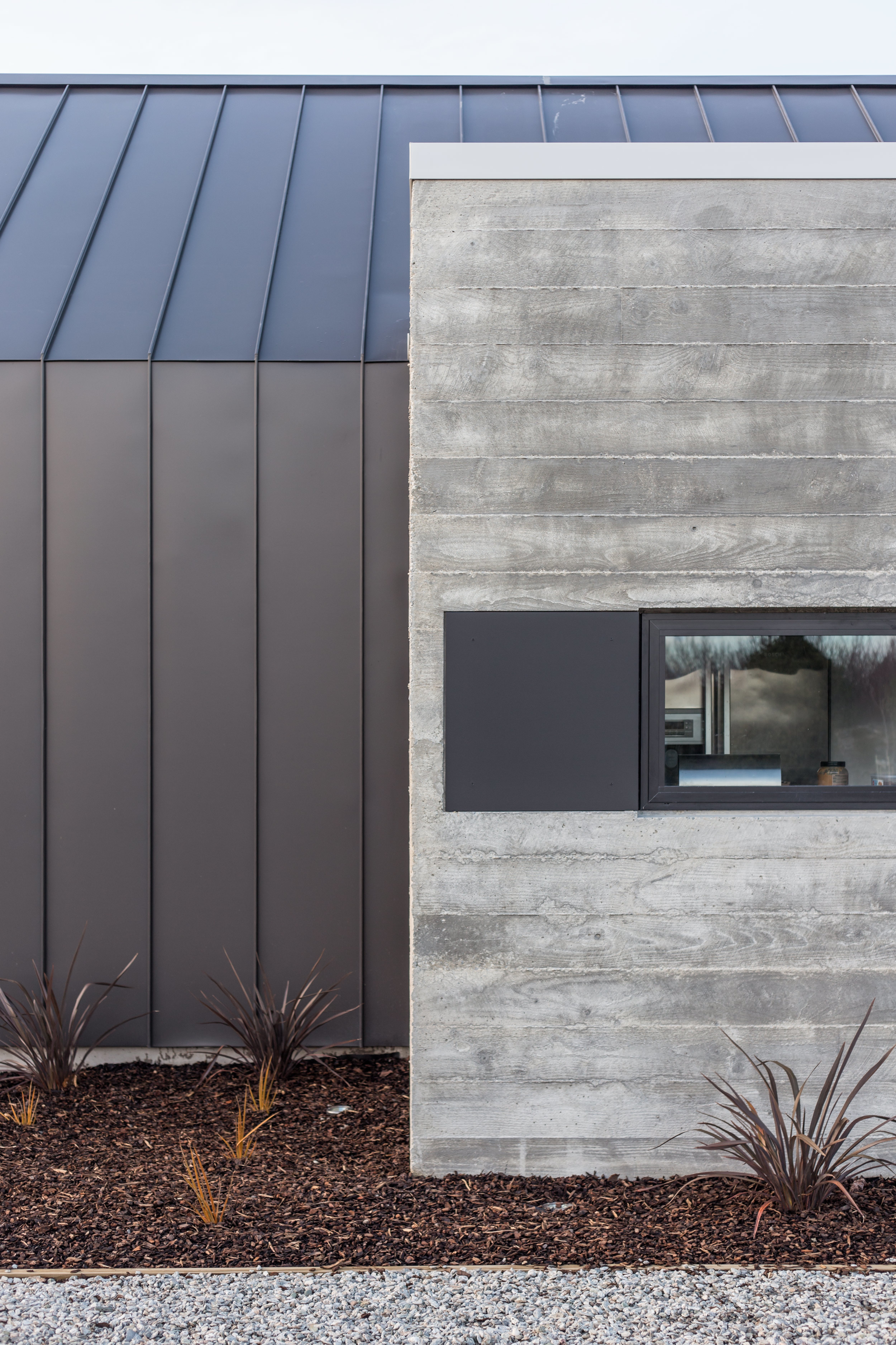 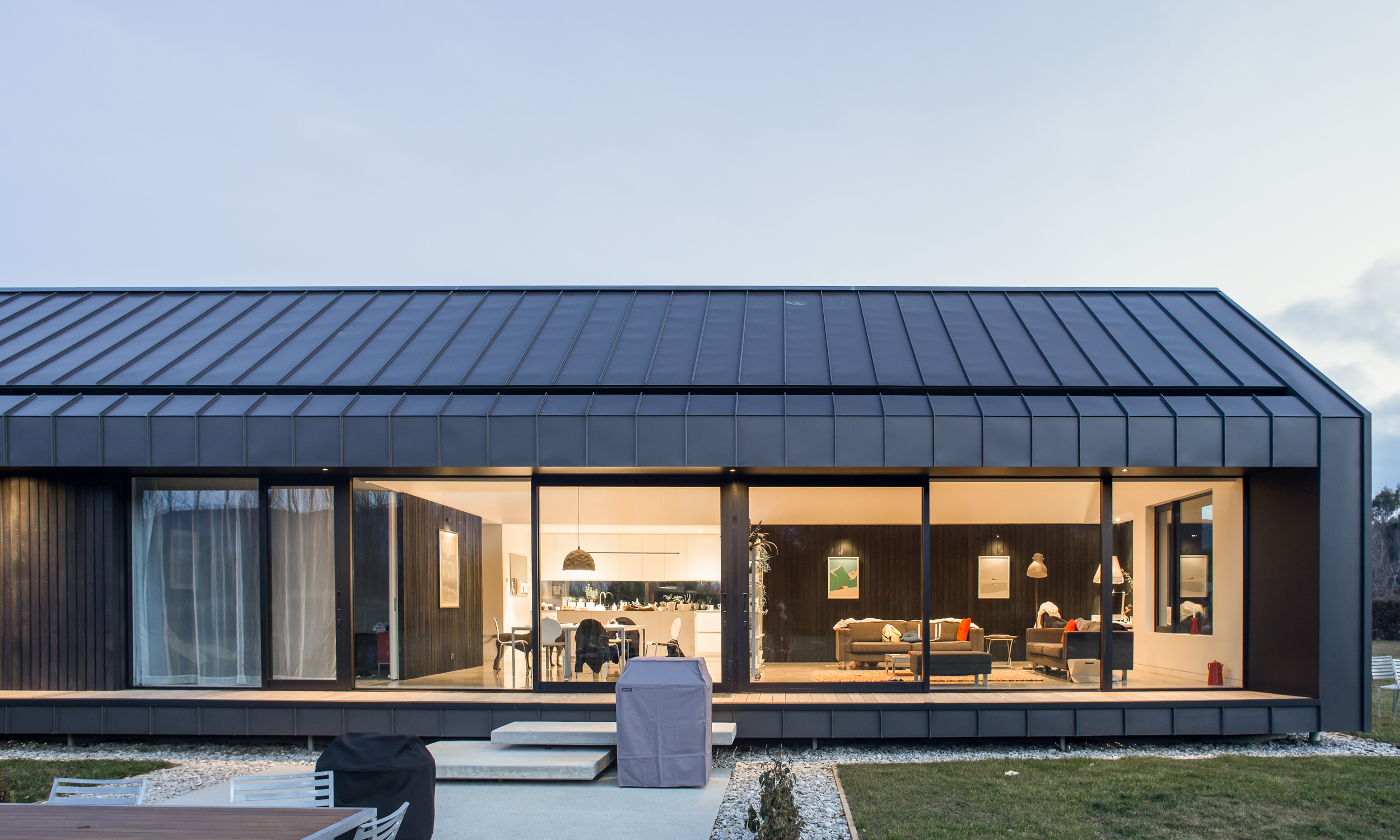 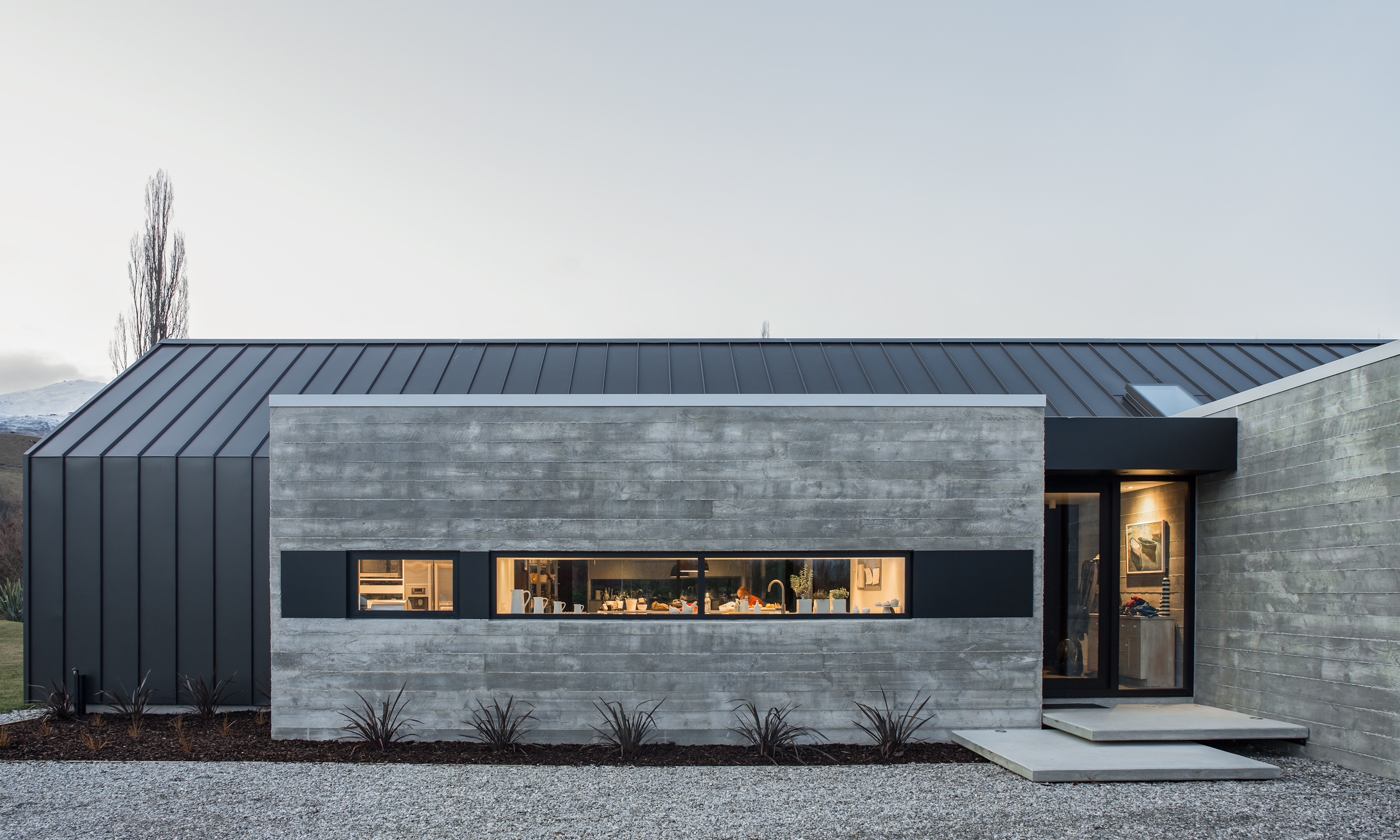 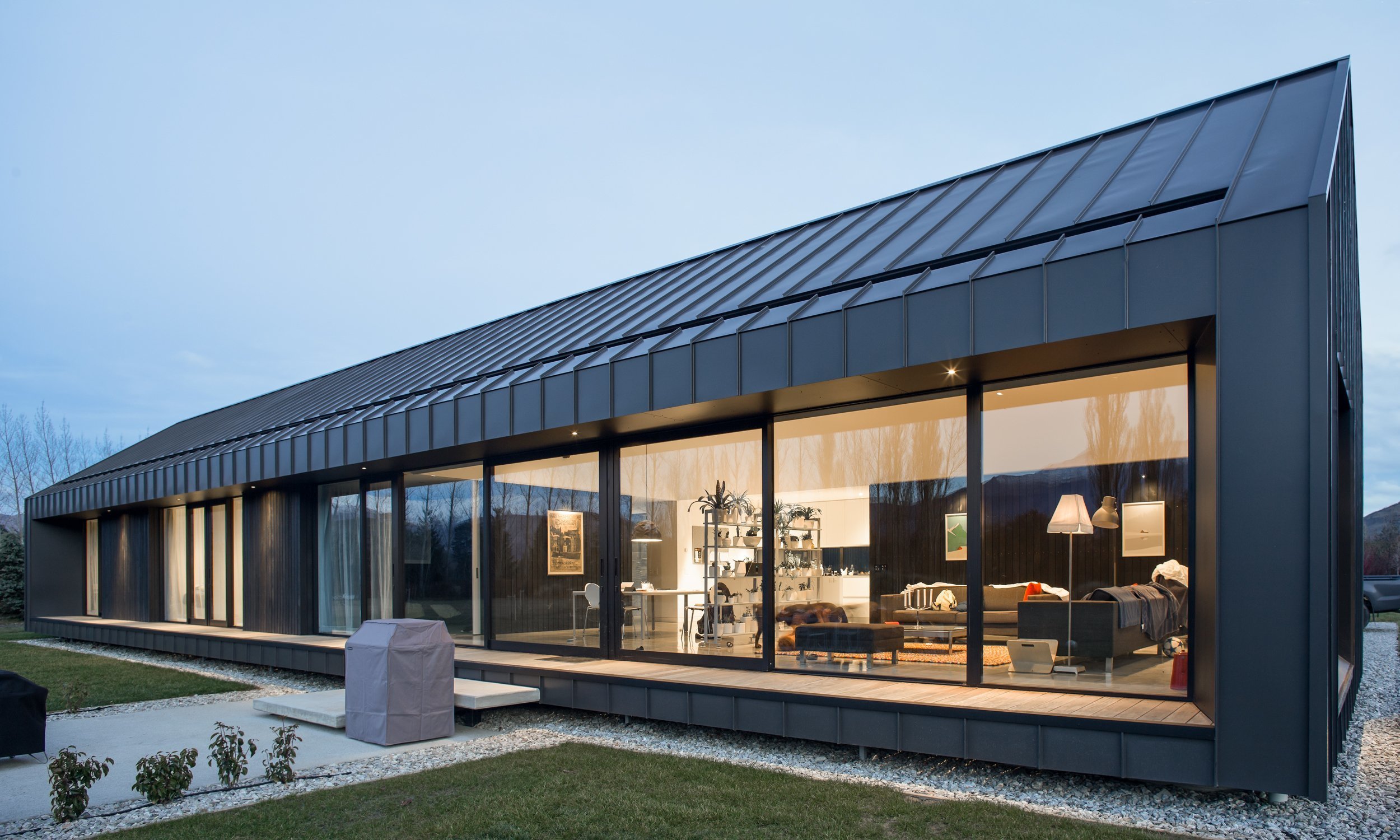